Dreich  ~ yes,  dreich, that’s the right word to describe today.  Dismal, dreary, bleak, a winter’s day at the end of May.  Outdoors, the colours are first dulled by the grey wash of sky, then smeared by the gloom of the atmosphere. Dreich, it is; maist dreich.

What’s a body to do but wrap up warmly and take a solid meal of soup, served without fuss or finery, straight from pot 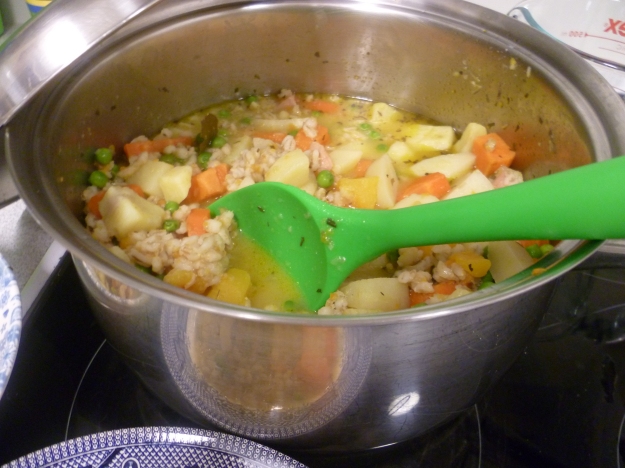 to plate. Slop and dollop.

Plate of soup to cheer the dreich of day

A dear friend showed me how to make this soup-stew. There isn’t a defined recipe. What goes in, aside from the barley and broth, depends on what is in the cupboard. In this case I have potato, pumpkin, two kinds of sweet potato, peas, broccoli stalks,  parsnip, carrot, onion,  celery, and bacon. The flavourings are salt, bay leaves and tarragon, and lots of black pepper.  The soup takes time to cook but time = very satisfying fodder. Even more satisfying, as an accompaniment, would have been a wee dram of that other time-dense barley concoction,  whisky.   Alas, there was none of that in the cupboard. 😉

It's that time of year again! My clematis is almost at peak bloom. #springnewzealand #nativeplants
Celebrating the first day of spring with blue skies and fragrant Michelia blooms.
From the kitchen bench: magnolia meditation or how I mark the passage of time in lock down. #magnolia #stilllife#lockdownlife
Looking Up in Lock Down
A dot of sunshine yellow on a grey day at Northbrook Wetlands, Rangiora. #kowhai#earlyspring#wetlands
This post is inspired by my friend @florapost and her "important nothings" which always make me happy. Yesterday I added this key ring to my own dish of important nothings. It was made out of the pottery mark on my grandmother's old dinner set. I love it. The key ring was crafted by Ann @ Saucery Jewellery. #meakinpottery
Loading Comments...