Still in the spirit of keeping track of myself ~

from Cynthia, author of A Good Home, a dedicated post, accompanied by flowers;

from Clare, at  A Suffolk Lane, an introduction to the lovely tradition of the Blessing of the Plough on Plough Sunday, and a reminder of the wonderful hymn ” “We Plough the Fields and Scatter”;

from Robbie (and her friend Lori), at Palm Rae Urban Potager,  notification of Save our Soil Blogger Action Day (21st January ).

for Robbie ( and Lori ), composting my soil in time for Save our Soil Blogger Action Day, and scattering seeds of buckwheat and wildflowers;

for Clare, a beautiful rendition of We Plough the Fields and Scatter,

and a glimpse of a harvest to come,

fed on the sweetness of summer raindrops;

for Cynthia, an arrangement

for a heart’s ease and a heart’s celebration in all things bright and good, no matter how tiny. 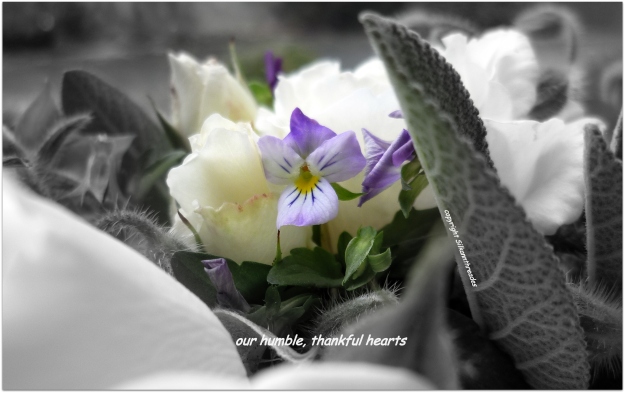 This post is an unabashed excuse to use the term ‘postprandial’. For, after my visual  feasting on so many lovely, virtual Thanksgiving dinners,  I am in a postprandial state of being; which means, in my case, replete, satisfied, satiated and inclined to tread the hours, softly, softly, ever so softly.

Yesterday was particularly postprandial , even though it was some 36 hours since I first sampled the smallest imaginary sliver of sliced turkey (one has to sample judiciously when such a huge repast is on offer via the interweb)……and I tried to move in a quiet and orderly fashion through the tasks of the day: a little internet banking, some bills to pay; some online shopping; a few cards to make; a birthday card to write; and, then, a tiny time of tidying and trimming and weeding in the garden…….which, although brief, suddenly seemed lack lustre, so I did this, in a moment of whimsy : I scooped up all the clippings and trimmings of Portuguese Laurel, heuchera, fern and borage and teucrium fruticans ,  as well as a few handfuls of sage and mint, and placed them in my precious Royal Doulton bowl.

Whereupon, one of my astute and very practical-minded Facebook friends, who knows my garden well, immediately commented “Looks like a lovely bunch wild growth! ”  Oh, how I  laughed, for no matter how I might try to style my floral/foliage arrangement, its base material is just that: the wild (over) growth from the garden; the trimmings and leftovers that were originally destined for the compost heap, before my imagination grasped them and gave them another life.

However, laugh as I did over my friend’s reaction to my  act of whimsy ( or was it folly?),  I did think this: that we can’t always fill our vase of life  with beautiful, elegant, perfect roses; sometimes we simply have to do the best we can with the leftovers, the dregs, the crumbs from the table. And, why not, make the most of them; my dog thinks they’re delicious. He spends half his life begging for them 🙂

The garden, at this time of the year, changes so rapidly. It’s almost a case of “Blink and you miss it”, whatever the ‘it’ is for that moment.  Last week I had lots of roses. Today, I am dead-heading  the first blooms of their season.

Out the back door, the mint is flourishing; so much so that it is growing across the door way, which is a happy situation for me as the leaves catch in the door and bring in a lovely minty fragrance to the laundry area.

With a bounty of mint, I decided to use it in my table vases, (in truth, regular drinking glasses). Since I don’t have a Christmas tree this year, I think my herbal arrangements make a good substitute.  They say “Happy Christmas” to me and, I hope, “Happy Christmas” to all of you. 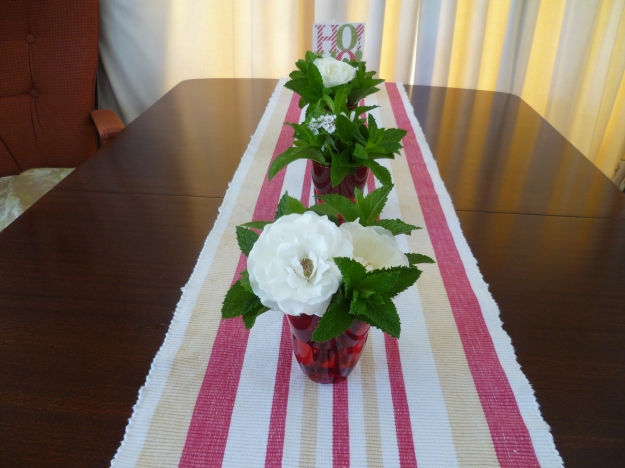 In the language of flowers mint represents virtue. The virtue of mint in a vase is that it lasts a long time and, with fresh water, will last the Christmas season.

Mother and son bonding over choices of life advice /meaning of life books. I chose a Tolstoy book. My son chose a book by Manson. What's your life advice book?
https://silkannthreades.wordpress.com/2022/06/22/a-conversation-with-kiwi-me/ Please join in a podcast conversation with me and @clanmother. We talk about homecoming and belonging and my New Zealand story.
When life gives you too many feijoas and too few Easter Eggs the only logical thing to do is to pretend the feijoas are Easter Eggs. Much healthier for you! And a sustainable way to celebrate Easter as well. 😁😂😁
Hello, sweet camellia. You arrived a little late this year but how good it is to see you blooming on this wet, grey autumn day. #mygardenthismonth
The nasturtiums don't seem to know that winter is coming. They are flowering prolifically in the garden again. Brought a heap inside to light up my day. #nasturtium
Last year the Government gave me a pension for my birthday. This year my present is an invitation to a free bowel screening programme. I am accepting the invite because I want to stay healthy so I can keep getting my pension for a long time! Do you get birthday presents from your Government? PS It is not my birthday yet. This is an early present. #bowelcancerawareness #lovemygovernment
Loading Comments...