As I make my way through Advent, 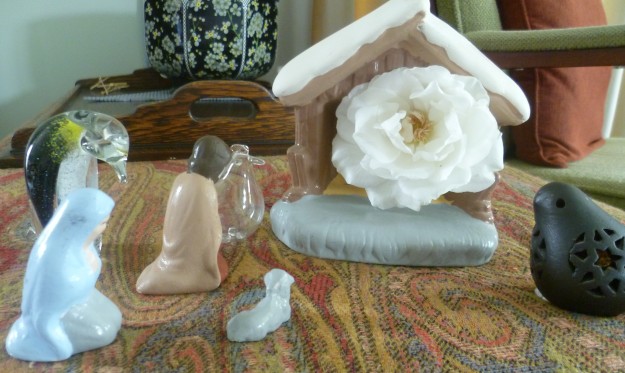 What mysteries will manifest this Advent?

an unexpected, personal Advent calendar mysteriously opens up before me.

It is a calendar that comes in the form of box or drawer that daily reveals, from the depths of clutter, long forgotten wonders and joys,

like this poem I wrote, for our church magazine, not long after our arrival in New Zealand.

Dark outside is the winter sky,
a strange, foreshadowing sky
to catch the warmth
of the midnight candles,
tightly held and sheltered,
in our tent of strangers.

Dark outside is the winter sky,
a strange, foreshadowing sky
to hold the guns
of strangers standing,
as black-robed angels,
cornered to our circled light.

Dark outside is the winter sky,
a strange, foreshadowing sky
to loose the star
of the warm, sweet babe,
delivered to Mary, carefully cradled,
in the stable of strangers.

Dark outside is the winter sky,
a strange, foreshadowing sky
to gather the ages
of then and now,
and the light that is the warmth,
within the lives of strangers.

The poem is a reflection on a Christmas Eve service in Maadi, Cairo,  in the late 1990s, during a time of terrorism and tension.  I am trying to capture the peculiarity of the lovely warmth of a service celebrating the “The Prince of Peace”, yet taking place under the protection of armed soldiers and police. Like Mary, we, too, were all strangers far from home, full of joy, but also anxious about the world to come.

The service, organised by the Maadi Community Church was held in a tent attached to the St John the Baptist church in Maadi.

Both churches continue to offer fellowship, a home away from home,  and solace to strangers, to this day, and seem to be thriving.  St John’s was established in 1931. Throughout the Second World War it served troops from Australia, New Zealand and South Africa.

In 2006, to commemorate its 75th anniversary, St John’s commissioned artist Debra Balchen to design/make nine stained glass windows focusing on the role of Egypt in the Bible.

I would love to see these special windows in situ. Maybe that is an Advent-ure (thanks for the word, Linda 😉 ) that awaits me.

Two special plates from the home of my late paternal grandmother now happily transformed into family keepsake jewellery. The transformation was carried out by the creative hands of Ann at Saucery Jewellery, Christchurch. I am beyond delighted. #recyclefavouritechina#sauceryjewellerychristchurch#Mason#Meakin
Contemplation at home.
On the tenth anniversary of the Christchurch earthquake I am feeling grateful for our extraordinary Transitional Cathedral which continues to provide a safe and healing space for the people of Christchurch. The Cathedral, designed by Shigeru Ban, is made from cardboard and shipping containers, a temporary structure to house the soul of a city as it transitioned from despair to hope. #christchurchearthquake #22022011 #10thanniversary #shigeruban
On January 3rd I cleared my kitchen bench of clutter. I wanted a sleek, minimalist look for 2021. I guess that sleek and minimalist are just not my essential style because, hey presto, topsy turvy colour and clutter are back in place; and it's only 9 January! #declutterfail
"Life is mostly froth and bubble,
Wishing everyone the best possible Christmas. And may peace and goodness surround you and uphold you on Christmas Day and always.
Loading Comments...
Comment
×