My recent posts have been noisy and busy, by which I mean full of details and links and information. Today, I made a promise to myself to quiet my loud mind and try, try to be still with my thoughts and my post. (But it’s  hard to restrain myself; so hard…..)  Here goes; be still…….

I adore the work of Jean Auguste Dominique Ingres.

I adore the work of nature along my garden path. 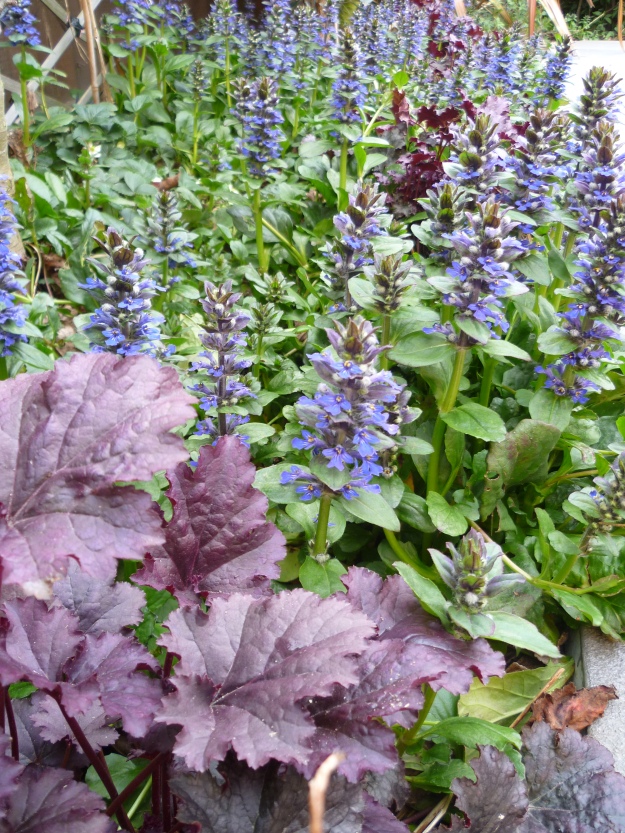 Spring Pathway of Coralbells and Bugles

And did I mention that I adore the paintings of  Jean Auguste Dominique Ingres; the rich fabric, the colours, textures, details, the sweet plumpness of the curves….. every moment my eyes linger on this painting of Madame Moitessier, I discover new delights…

And did I mention that I adore Nature’s Canvas too, with its myriad textures, 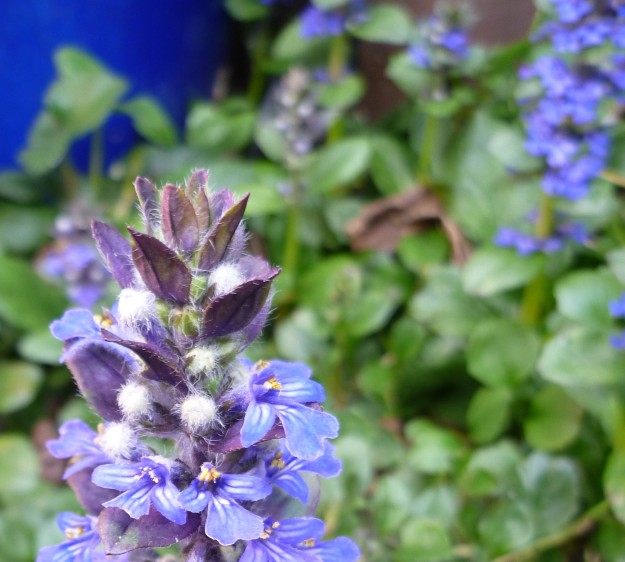 Details of Ajuga the Bugleweed

Sweet Lily of the Valley

Be still…… and listen; do you hear Spring singing in the garden? Can you see the music playing?

“When the chamber of the scarlet-clothed Hours is opened
And the nectareous flowers usher in the fragrant spring,
Then are scattered, then, on the immortal ground
The lovely petals of violets; roses are wound in our hair;
Loudly echo the voices of songs to the flutes,
And choirs step in procession to dark-ribboned Semele.[69]”

In my much younger days, I was very interested in sewing and needlework. My mother, who believed she was not skilled with needle and thread, arranged for me to have sewing lessons with some of her more skilled friends. As a result, by the age of about ten or eleven, I became quite the little seamstress, cheerily making clothes for myself, my little sister and my mother.  My enthusiasm for sewing was at its peak in those years and, although I continued to sew in to adulthood, it was never with the same exuberance and excitement. Finally, at the ripe old age of 26, I stopped sewing.

I may have stopped sewing, ( anything more than a button on a shirt, that is ), but I remained in love with the idea of sewing; the wondrous process of turning one form of cloth into another shape and size ; the different stitches and seams, the cuts and darts and frills and facings. Not to mention the lovely ribbons and laces and trimmings, and the beautiful hand-made button holes with equally beautiful buttons, usually recycled from that ultimate household treasure trove; the button jar.

When we lived in New Delhi, I was privileged to be part of a group of women who employed a tailor, named Mr Singh. Not just any tailor. As far as I was concerned, he was the most skilled tailor ….EVER. As per our group agreement, each of us booked Mr Singh’s sewing service for a couple of weeks at a time, and, at the appointed hour, he would arrive on his bicycle, with lunch container secure on the handle bar, and his hand-operated sewing machine carefully strapped to the carrier. Then, quietly and efficiently, he would settle in his chosen corner…..and sew and sew;  everything and anything  I asked for. 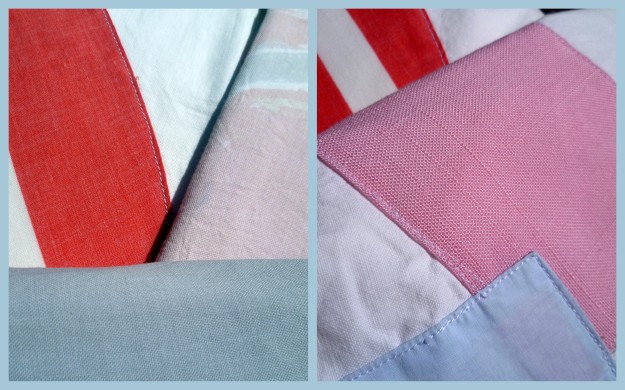 For me it was magic; for him, I suppose, it was merely another day at the office.

Here is a little piece I wrote about Mr Singh in February 2003.

“Mr Singh. Bearded, turbaned, thin as a pin. There he sits, cross-legged, at his sewing machine, in the dim, back room. A silent figure, stitching his magic; making my dreams. I can see him still in the dim back room of my mind.

Why do I see him now? Because today, his stitches, and my dreams, are displayed brightly on the washing line. The duvet cover we created together, from dress scraps and my grandmother’s sheets, is blowing in the Christchurch breeze; glistening white in the glare of  a Christchurch sun. I look at the vibrant colours on white 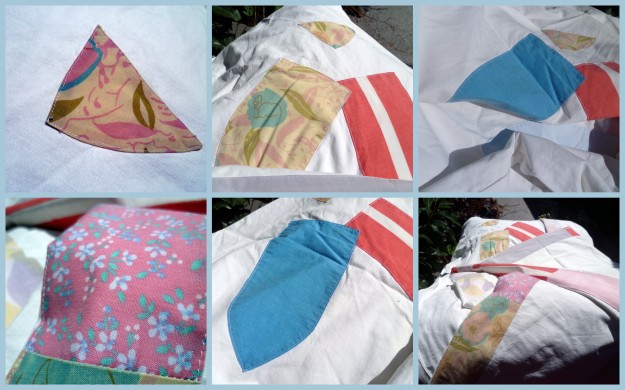 and remember the muted tones of Mr Singh; blue and grey,  grey on white, grey on grey, almost a shadow in the shaded back room.

Ah, yes, quiet, gentle Mr Singh; a master of many stitches.  I miss his serenity, his dignity, his creativity.”

The photos in this post are all of the duvet cover. I took them this morning in our bright autumnal sunshine. The colours are no longer bright; they have softened with age. Twenty three years have gone by since Mr Singh pieced all the different fabrics together.

Sheet notes: the white cotton sheets used for the duvet are at least 50 years old now, and the coloured scraps range in age from  25 to 35 years old. The buttons on the cover would be close to  30 years old . I think they  were salvaged from a dress of mine, made in Zimbabwe!  The duvet cover spends most of its present life in the linen cupboard, snuggled in lavender, in refined retirement. It is no longer subjected to harsh wear and tear and the rigours of washing machine and sunlight.

When life gives you too many feijoas and too few Easter Eggs the only logical thing to do is to pretend the feijoas are Easter Eggs. Much healthier for you! And a sustainable way to celebrate Easter as well. 😁😂😁
Hello, sweet camellia. You arrived a little late this year but how good it is to see you blooming on this wet, grey autumn day. #mygardenthismonth
The nasturtiums don't seem to know that winter is coming. They are flowering prolifically in the garden again. Brought a heap inside to light up my day. #nasturtium
Last year the Government gave me a pension for my birthday. This year my present is an invitation to a free bowel screening programme. I am accepting the invite because I want to stay healthy so I can keep getting my pension for a long time! Do you get birthday presents from your Government? PS It is not my birthday yet. This is an early present. #bowelcancerawareness #lovemygovernment
Walked here today. These trees and the river have been a part of my landscape for more than 60 years. My parents and grandparents knew these trees and this river, too. I can't even begin to imagine what it would be like if I suddenly had to leave them, not knowing when, if ever, I would walk here again. I am so very grateful to be able to walk in freedom and peace.
Crab apple season has begun. These beauties are from a tree on the street.
Loading Comments...