I am bee-ing uncharacteristically envious. My blogging friend  Ruth,  who reflects on life in central Christchurch, is now a host parent  to 20,000 bees. She is part of a “buzzy movement” to bring  bees into the city’s  green spaces and gardens, as well as onto the city ‘s roof spaces. I am envious because I would love to host a hive but, sadly,  most of my neighbours wouldn’t love me if I were to become a host family.  ( I can hear the complaints about bee droppings on their washing  before I even finish this thought in my head 😦 )

Sigh! But, even though a hive would be a difficulty, I do have a flourishing bee population in my garden, anyway. This is mainly because, this year, I have left the plantings, in my raised garden beds, to run to wilderness. 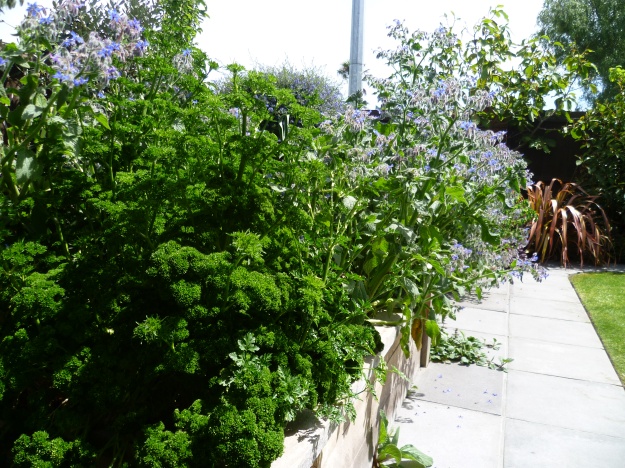 I was about to replant the beds with orderly rows of vegetables when I realised that, by doing so, I would be removing a vital food supply, and haven, for the  bees and  little birds. I reasoned that it was easier for me to find an  alternative supply of vegetables than it was for the small ones to find sustenance elsewhere. So the wilderness of overgrown parsley, 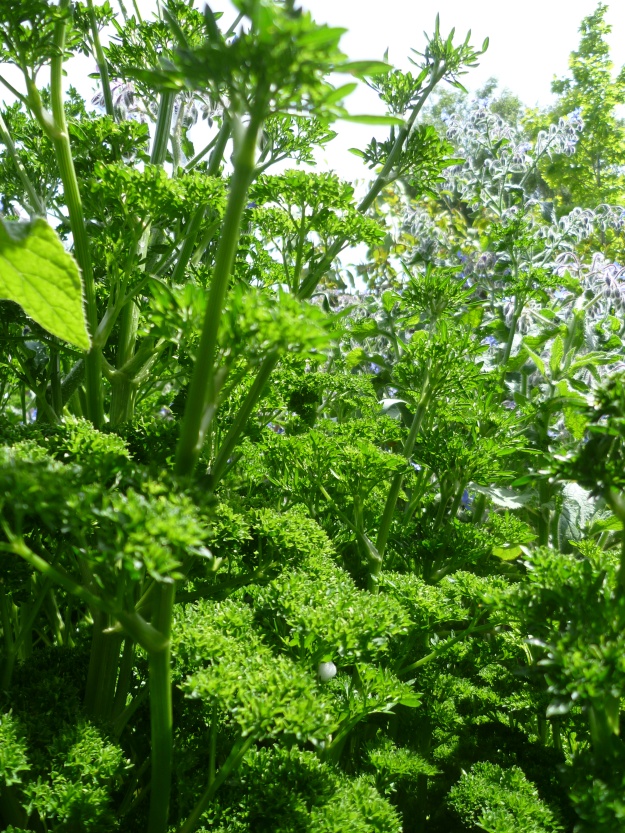 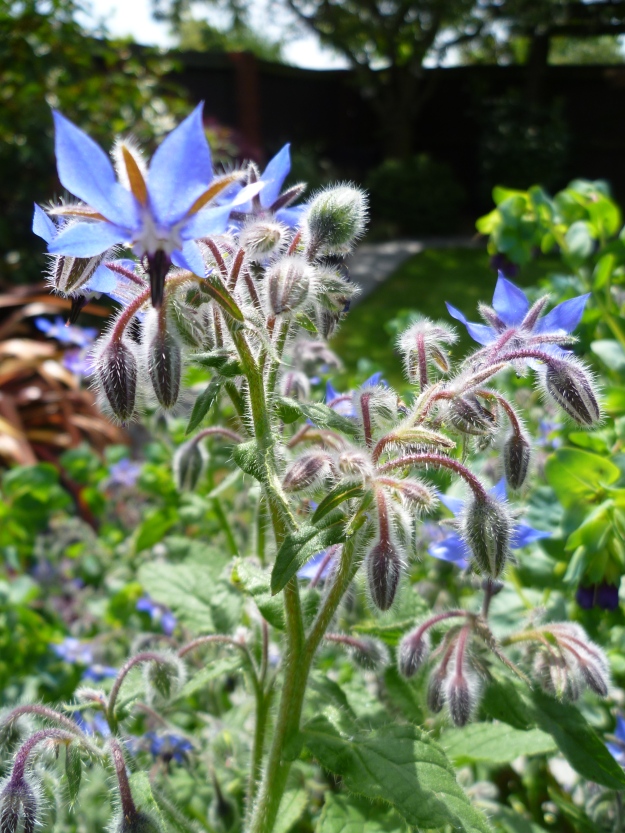 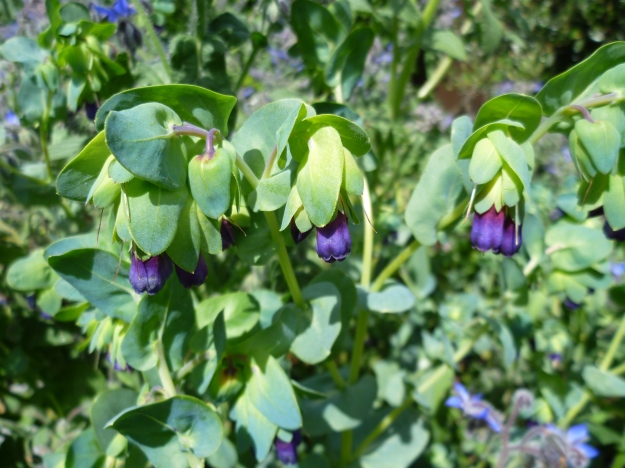 My reward….no honey… but the  bee chorus  is so humming that I can hear it from at least a metre’s distance.  The wild growth in  the planter boxes is supplemented, in the background, by the prolific flowering of my  ceanothus   blue sapphire . They are a-shimmer with bee activity, although you would hardly think so, since I have only managed to capture one of their number! 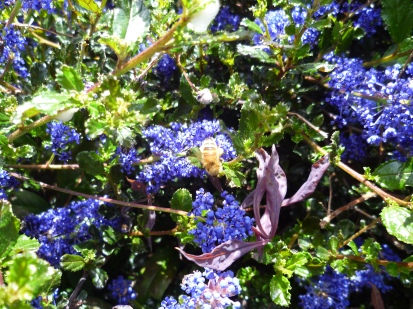 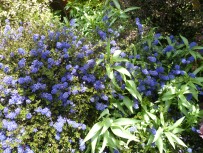 in the sapphire blue 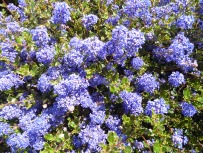 Ruth’s bees may travel up to five kilometres to gather food. I wonder if I am close enough for any of them to visit me. Wouldn’t that be lovely if they did?  Meanwhile Jack and I enjoy the bees that are already here. 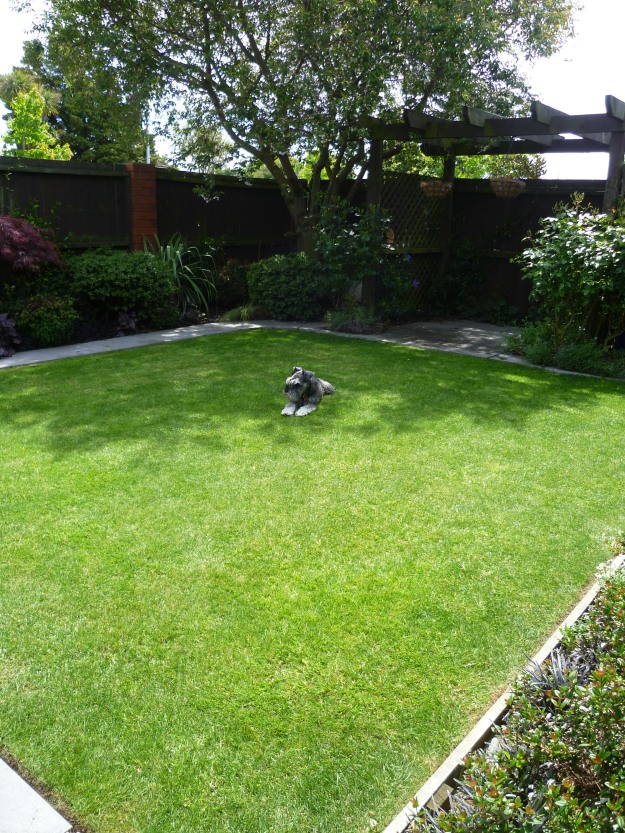 One corner of my garden is growing like a little wilderness, faster and more prolifically than the other areas. I am wondering if the exuberant growth has something to do with the long hours of summer daylight coupled with the night light from a very bright, very large, street lamp. I attempted a teeny, tiny trim of the plants this morning and brought some of the trimmings indoors to refresh my vase of kitchen flowers. Once the foliage and flowers were in their new setting, I realised that I now had a miniature version of the garden corner inside the house. And the scaling down of the corner into one compact area gave me a wonderful perspective on the genius of nature’s colour coordination abilities. 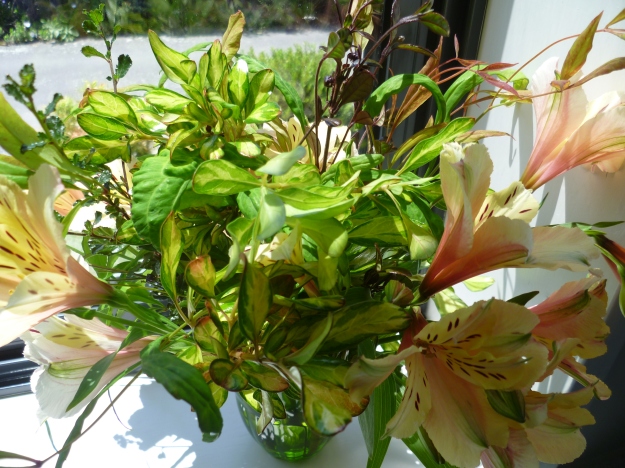 Every morning, from my kitchen window, I can see bumblebees a plenty enjoying my small, but vigorous, crop of phacelia and borage. (Are those plants ever unvigorous, I wonder? :D) I love watching them as I drink my morning coffee.

In the front garden I have several ceanothus bushes in full blue bloom. Regular bees, more than bumblebees, are having a feast in there. I can hear the bees before I can see them; such a buzz and hum; the equivalent of a cat purring with contentment. 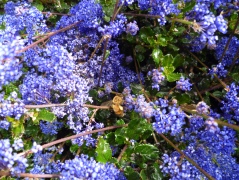 Capturing a little of my mother's story in my commonplace book #Fiji#islandlife#1949#letterwriting#journals#diaries#commonplacebooks #lamypen
Many years ago, in a fit of enthusiasm, I made a poster for my WordPress blog #silkannthreades. I still have the poster. I still have the blog. I am fond of both but my enthusiasm for writing my blog has waned. Perhaps I will return to my blog when the time is right. The link to my blog is in my bio.
Things that make me happy: a good book; paper; pen; hydrangeas; pretty things. #twigsinmyhair #cynthiareyes #lamypen #flowers #bluehydrangeas #hortensia # basho #eleanorfarjeon #oharakoson
From the kitchen bench, a tribute to world famous New Zealand hymnwriter and activist, Shirley Murray (31.03.31 - 25.01.2020 ). In my commonplace book, I have written out the words of one of Shirley Murray's very well known hymns. #hymns #newzealandhymns #shirleymurray #humanrights #thepenismightierthanthesword #commonplacebook
Borage stars decorate my concrete path #designedbynature #borage
The essence of December captured in a crystal bowl.#driedflowers#southernseasons#lovemysmallgarden#vintagecrystal