This morning I woke up to a  version of this ; The Day Thou Gavest, Lord, is Ended, one of my all time favourite hymns.

I lay in bed listening to words and music that I hadn’t heard in years, and felt profoundly peaceful. The hymn was part of our New Zealand  Praise Be programme for Remembrance Sunday, on this second Sunday in November.  On Remembrance Sunday,  people throughout the Commonwealth  pay tribute, before God, to those who laid down their lives in war.  I haven’t been to a Remembrance Sunday service, in real life,  but the few scenes (and one  service sheet ) that I have seen, via the internet and television, always impress me with the beauty of their words and their music and their surroundings. Heavenly and divine aptly describe these church services where we honour peace and life, and, somehow, try to atone for the horror of war and conflict.

Now, although to a certain extent I am a person of faith, my spiritual life is more bread and butter than angels and divine inspiration, which means that, as I was  listening to the hymn this morning, my mind suddenly  jumped from wreaths on tombstones to one word…hardtack!  Yes, hardtack! Well…. it was nearly breakfast time, so quite natural that my stomach/brain would be reminding me of food. And, since an army is said to march on its stomach, I would guess most soldiers, of older times, also thought  more often of hardtack (what they would rather have, or what they could do with it!)  than their Maker.

Hardtack, as many of you may know, is a  type of plain cracker made from flour and water and salt and, in ages past, was used to sustain soldiers and sailors.  Hardtack was hard, very hard, and very long- lasting. It was a substitute for bread. In World War One, Australian and New Zealand troops ( ANZACS)  jokingly called their hardtack,  ANZAC wafers. They were also called ANZAC tiles.

According to this source,  http://definingnz.com/bully-beef-and-biscuits/ , the daily ration of an ANZAC soldier  was ”disablingly bad”  and included 7 ANZAC Wafers ( ie 7 hardtack biscuits).  Considering many soldiers  didn’t have a full set of teeth, or had false teeth,  eating the rations must often have required more energy than they had to spare. Apparently the Anzac biscuits (and the bully beef) were so inedible that, sometimes, they were merely nibbled on and then thrown in to No Man’s Land.

The Australian War Memorial  website offers a recipe for ANZAC wafers. However, I don’t suggest you try it, unless you  want to boost your dentist’s bank balance.

A happier and more nutritious alternative would be to try these delicious, crunchy rye crackers that I made, based on a  recipe  by New Zealand caterer, Ruth Pretty. I had to  bake the crackers about 15 minutes longer than suggested, to get the degree of cracker-ness that I like but, my goodness, they are good. No armed services personnel would throw these crackers in to No Man’s Land. 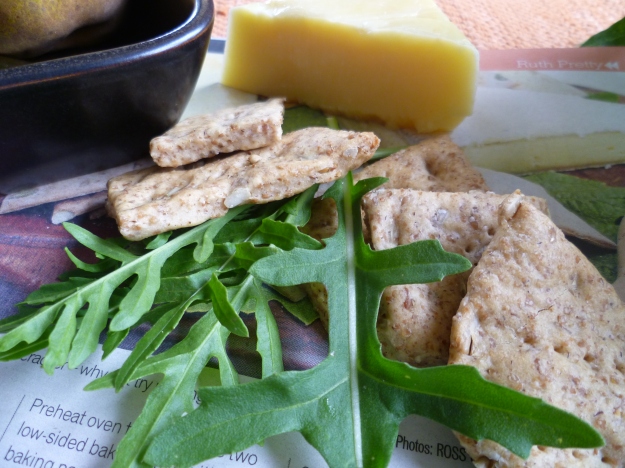 And, if you do make these crackers, or something similar, remember as you munch, that our service personnel once had more to fear than enemy fire. Remember too, that how we treat and train our armed services is often more  important than how we pray for them.

and Pears and Rocket

Some viewers may not be able to see Praise Be for copyright reasons.

It is prime time for plum foraging. This is some of my haul from yesterday and today. I love the colours and flavours of freshly picked plums.
Good morning world from my window.
Playing with flowers again today. This poppy petal has been spending some time pressed between the pages of an old calendar. I am pleased with the results of the drying process so far. But it needs more time to dry fully. Back into the calendar press again.
Lovely muted colours down by the riverside at Stewart's Gully yesterday. #rivers#newzealand
https://teatoasttrivia.com/2021/12/06/season-3-episode-49-liz-humphreys-elisabeth-van-der-meer-and-mandy-henderson-on-farewell-to-the-karamazovreadalong-and-welcome-warandpeace2022/
From the kitchen bench: Soliloquy on the second Sunday of Advent. "I have swept and I have washed but still nothing is as shiny as it should be.... Come in, Come in. " (Mary Oliver )
Loading Comments...
%d bloggers like this: