I am in a disorderly, unruly mood today, for no reason, except ‘just because’. And ‘just because’ that is so, I have decided my post is going to  be a hodgepodge; a veritable stew of unrelated subjects; a mingle-mangle, a gallimaufrey, an omnium-gatherum and a farrago, as well. It may even be a salmagundi too, although I don’t propose adding a recipe for that.  I will, however, tempt you, later, with another food item,  Boarders’ Favourite……..which I am planning to make for supper tonight. 🙂

So let’s begin with my menu of  hotchpotch, in no particular disorder.

From Felicia Dorothea Hemans,  she of ‘the boy stood on the burning deck fame

“For man can show thee nought so fair,
As Nature’s varied marvels there;
And if thy pure and artless breast
Can feel their grandeur, thou art blest!”

These words and photos are  in support of Silvana http://tinasca.wordpress.com/2013/08/19/nature-is-victim-again-yasuni-itt/ who, with friends, is trying to save the Yasuni in Ecuador. The photos, which I have chosen, ( two of which are Japanese  Mon), represent, for me, the unity of life on earth and how our ecosystems are intimately connected, no matter where we live on the planet. 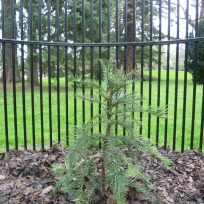 The leaf Mon, also represents my first teeny-tiny attempt at using the paint tools on Gimp. And the amount of hand/eye coordination, and fine motor skill control, that programme required of me,  leaves me in awe of all my followers  who paint and sculpt and craft. You are amazing!

One such sculptor/blogger is Virginia at Muse-ings.     In her latest post she wrote of using the self-timer on her camera, and, immediately, a little light pinged in my head, and I remembered that I, too, have a timer on my camera.  And this is what happened, as a result; an old-fashioned, unruly ‘selfie’….

and, then, it was such fun using the timer, I tried it again and again. Later, encouraged by Heather in Arles, http://lostinarles.blogspot.co.nz/ I tried to photo edit one of the images, which created much bafflement for me, because, as my daughter says, Gimp requires ‘counter-intuitive’ thinking, of which, it seems,  I have very little. Hey ho….can anyone intuit what I did, or did not do, with my editing? As you can see, I am thinking upon it myself, hand to chin, lost in thought 🙂

Now, as a reward for sampling the hodgepodge menu, here’s some  chocolate deliciousness in

The Fo Guang Shan Buddhist Temple in Christchurch decorated for New Year. I visited on Wednesday.
Spotted in the wildflower section of Hagley Park today. They made me laugh but is this technically vandalism? #feelingconfused🤔
Small amusements on the last day of the year; reflecting on the commonplace book which I am keeping on my latest reading #thesingsonggirlsofshanghai #eileenchang
Twilight in my summer garden. I love the little white reflections in the window # summertwilight #daisies
Is there anything better than a book which is beautiful in content and cover? #eileenchang #boxingdayreading
From my home to yours, I send every good wish for your peace and well-being during the festive season and into the New Year.
Loading Comments...
%d bloggers like this: