This is a piece I wrote in  April 2004 to commemorate the restoration of my mother’s Glory Box. It is long, so I will post it  in two parts. My parents were married in 1948 so the Glory Box pre dates that year.

A hope chest, dowry chest, cedar chest, or glory box is a chest used to collect items such as clothing and household linen, by unmarried young women in anticipation of married life. (http://en.wikipedia.org/wiki/Hope_chest)

The box has been in my uncle’s garage for 20 years, or maybe it’s 30. No one is sure. No one can remember exactly how it came to be there. I remember it in the hallway at Grandad’s house at New Brighton. It was warm and golden like honey, 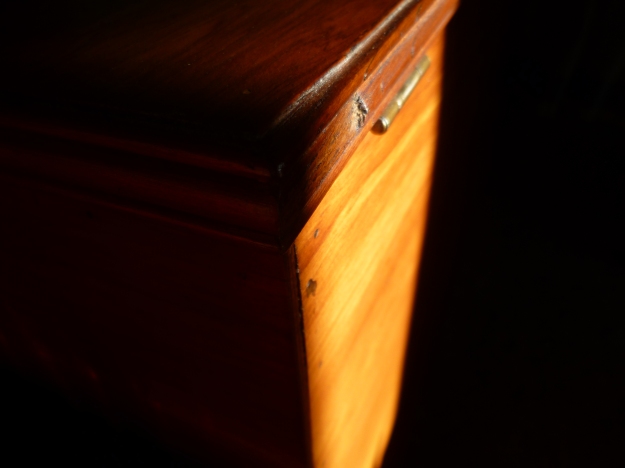 and inside there was a pair of hand-knitted gloves, all sunshine-yellow mixed up with a touch of custard. It was once Mum’s glory box. Mum says she is sure there’s no glory in it now. She can’t even remember what’s in the box. My uncle says ‘blankets and coins’. Dad says ‘rubbish’.

My uncle is cleaning out his garage, so we tackle the box. It’s hidden under  cartons and suitcases. The lock is broken. The top is bent. There’s a hole in the side from my cousin’s skateboarding-in-the-garage days. But it has survived the flooding.

Inside the box, there are blankets and coins. My uncle says the coins are not worth a penny. Are they Mum’s? No one is sure, but we keep them anyway. Most of the blankets are moth-eaten, fit only for rubbish. As are Nana’s two, tiny, moth-reduced cardigans. Was she really so small?  The mohair rug from her house at Sumner is musty but there’s not a moth bite in it. The back says,” This rug will be replaced if attacked by moth”. Did they really intend a more than 60 year guarantee? 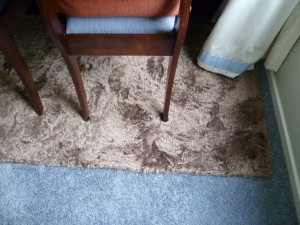 We find towels and tarnished silver-plated forks. They’re probably Nana’s. Who put them in the box, and when? We find Pop’s starched white collars, size 17, at least a dozen. His cigarette holder with the little gold rim is in the box too. I remember the cigarettes, but not the holder.  We find their passports, but, hey, I say, why is Nana, ‘Maude’, with an e? She was always Maud without an e. I remember that. My uncle goes upstairs and checks her birth certificate. The passport is wrong.  How did that happen? No one knows.

The box is musty. I have to wear a mask to avoid the smell. The photos are particularly musty. There are dozens of them. Some are from Fiji days, others are older. Most of them are unlabeled. Dad says, this is such and such, and my uncle says, this is so and so.  Sometimes they agree, sometimes they don’t. Fanny, the Harewood grandmother, and her dog, Rajar, are easily identified. 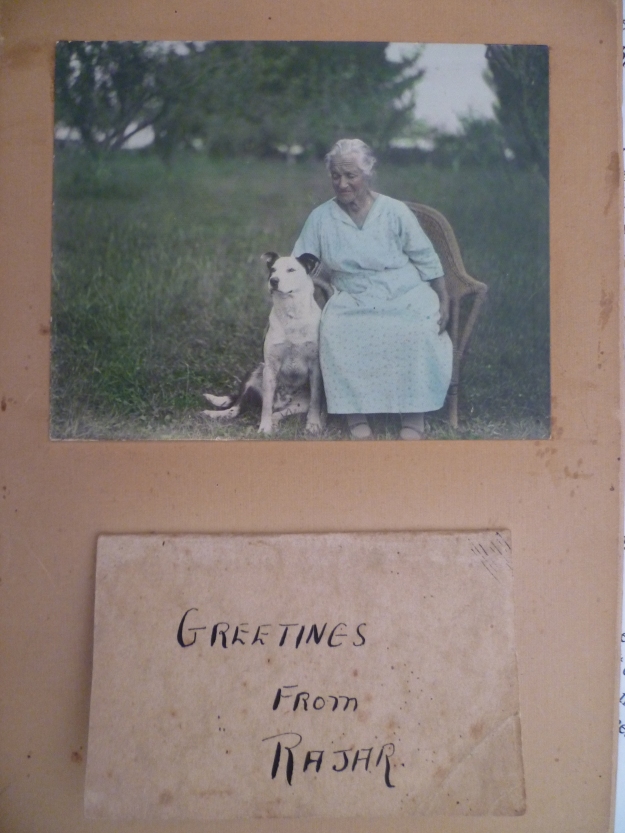 They are not so sure about their Dunedin grandmother. Is that really her? She looks too young to be the mother of grown-up daughters. They’re undecided.  Dad says this is a portrait of Aunty Lily, Frank’s Lily, from Canada. My uncle says not. He says it’s one of their father’s sisters; maybe Sissy, maybe Mary.  She looks like my sister, so maybe my uncle is right. But Dad is sure it is Lily; the one with tales of sledding across the snows of Canada. 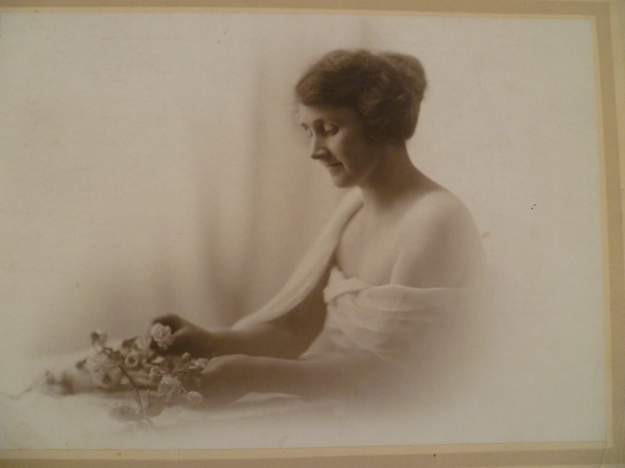 The brothers agree that this one is Teddy. 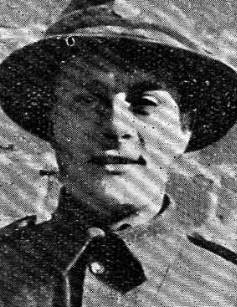 Teddy, of the silver pocket watch, who died at Gallipoli. There’s no label on the photo, just an address, but they know it’s Teddy. Teddy, who died years before either of them was born.

There is a photo of Dad as a baby. It’s the only one of the photos still in a frame. It isn’t labeled but there’s no mistaking Dad. 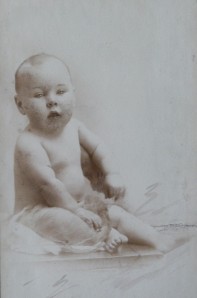