This is Mrs Cockalarum, who arrived last Christmas complete with name.  She is, in her regular domestic life, a decorative paper weight, only, most of the time, she decorates a chest of drawers and no paper comes near her.

She has a few animals to keep her company, including some of her own kind. However, every now and again, even a paperweight can do with a change of scenery and a new point of view, so I decided to take Mrs Cockalarum on an autumnal excursion.

Starting indoors, we tried out the floor,

then a higher perch,

but her view was obscured so we went outside, where she dusted her feathers with the scent of alyssum and 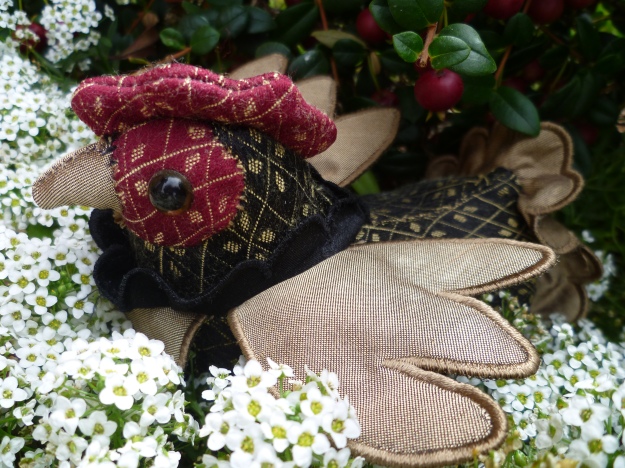 pecked at the sweetest red berries. 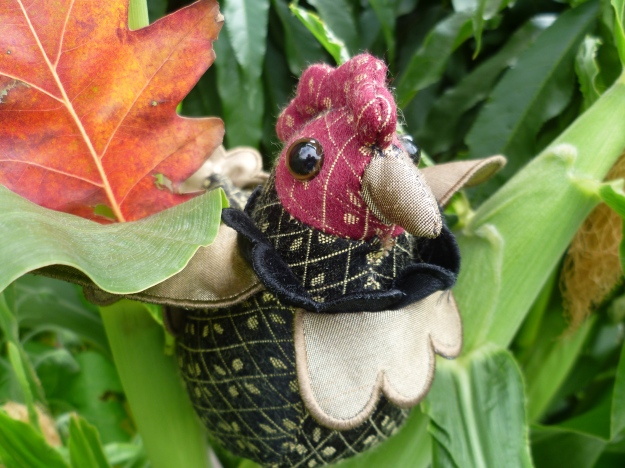 and took a swing in a hanging basket.

Today, the world was full of surprises for me and Mrs Cockalarum, not the least of which was finding this in the tree outside my house! 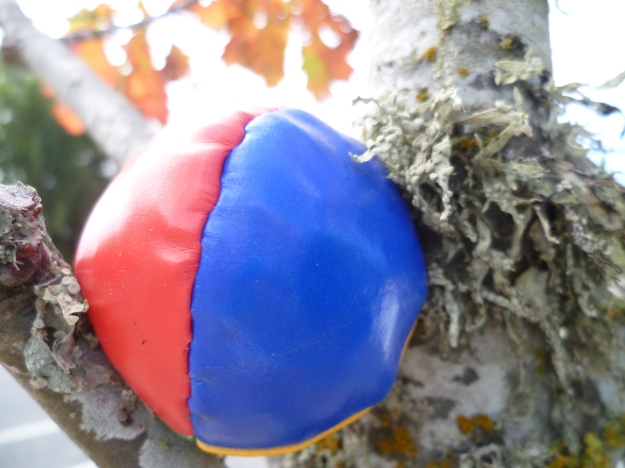 Footnote: The berries are called New Zealand cranberries. They are delicious but are not much like any  cranberries that  I have ever tasted. Their real name is Chilean Guava ( Ugni molinae (Mrytus ugni)). Apparently the berries were a favourite with Queen Victoria. Mrs Cockalarum and I have given our unroyal seal of approval too.

Detail from the Korean-themed wall-hanging in my house.
Sadie Rosemary has been in our family for about 98 years. She is almost part of the furniture, so to speak. She is currently in the sitting room where she can enjoy the flowers and our company. Her usual sitting place is in the bedroom.
Every now and then I clear the clutter/stuff from the dining table but it doesn't takes long to find its way back. There is usually more clutter on the table than food!
Installed my Rock Wren metalbird today. It is rocking the garden fence. @metalbirdnz #gardenart
Oxalis and Daisy to brighten the kitchen window sill.
It is peony time again. I love this fragrant peony which grows in my back garden. Peonies can last for a 100 years. I think my peony could be 50 to 60 years old.
Loading Comments...
%d bloggers like this: