Today is Show Day. We decided that the A&P Show would be too exciting for us, what with Prince Charles and Camilla being there, and all, so we went to another show  –  a wildlife one at Waterford Reserve. It was very tranquil, except for being dive bombed by two nesting swallows and being told off very vigorously by a pukeko.

Here is a tranquil view of Waterford Reserve.

And here is one of the wildlife, plus wild weeds 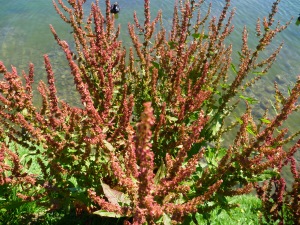 More wildlife; ducks, that is!

This pair turned their backs on me. At first, I thought they were resting with their young but, on closer inspection, the strange shapes near them appeared to be dry flax flowers. Were they substitutes for lost babies? They were being protective of them.

It’s nice to see all the daisies and dandelions and general weedage. It means that no one has been reckless with weed killer.  Here is a pretty orange flowered weed

Then it was home in the little “motoka kiwikiwi” where we found, awaiting us, the wildest wildlife of all, aka Jack :D.

3 thoughts on “Wildlife and Waterford Reserve”

From the kitchen bench: Soliloquy on the second Sunday of Advent. "I have swept and I have washed but still nothing is as shiny as it should be.... Come in, Come in. " (Mary Oliver )
It's that time of year again when I get to hype over picking and eating the first blackcurrants from my garden. Utter deliciousness! #southernseason #blackcurrants
Feeling homesick today for the town, in Fiji, where I was born and where I lived for the first 12 years of my life. It's been 19 years since I last visited my 'birth' town. This family photo was taken in our front garden, circa 1958. #townwhereiwasborn #homesick #nostalgia #tcklife
Wishing all my US family and friends a Happy Thanksgiving.
So pleased to have the opportunity, yesterday, to visit the area at the mouth of our great Waimakariri River. This great expanse of sky, water, and sand is an
From the kitchen bench: lawn daisies, plus one dandelion, in a vintage egg cup. Why the kitchen bench? Because that is home central. Everything important and unimportant happens here.
Loading Comments...
%d bloggers like this: